← back to
Indie Recordings
Get fresh music recommendations delivered to your inbox every Friday. 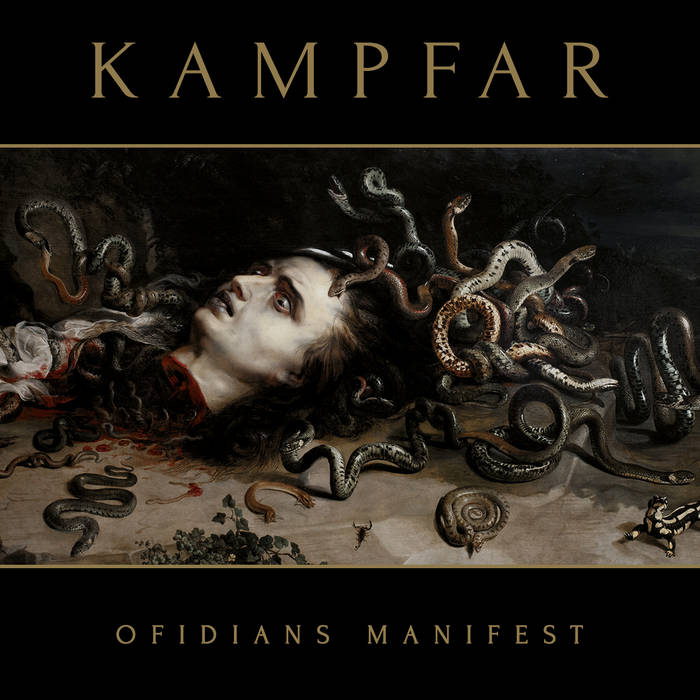 Approaching 25 years of existence and having grown to become one of extreme music’s premier live outfits, while releasing albums that would dominate year-end lists and even bagging a Norwegian “Spellemann” Grammy award for their ‘Profan’ album, Kampfar looked ready to go and dominate for years to come. But behind the music, disguised during the intense live shows, underneath it all, was a clarity that the road’s end was nigh.

Founded back in 1994 by Dolk, who recruited Thomas to take care of strings and keys while the former focused on drums and vocals, the band was an underground gem for years. A band whose first records are spoken of with reverence to this day, perhaps helped by the low profile they kept at the time. It was ten years before the first live show was performed, at this point bassist Jon and drummer Ask Ty had joined the ranks and this line-up released another three albums before Thomas departed the band, 2011’s ‘Mare’ the last release with his stamp so solidly placed on it.

This recording marked a shift in the style and expression of the band, becoming the leading star for the records to come, now with the new guitarist and songwriter Ole who quickly developed into a key force of the group. With the albums

‘Djevelmakt’ and ‘Profan’ Kampfar established a new era for Norwegian Black Metal, proving that while some may have lost their passion for the fiercest musical exploits, these men had a hunger that was as ravenous as ever.

Except that life has a knack for surprise. Health issues caused the band to slow down and during the summer of 2017 it was decided that there would be no more Kampfar, unless something radically changed. The guys didn’t see each other for a year, didn’t really speak or keep up any kind of contact, just focusing on their own personal lives. “It was time to just heal, to not cause any more damage, to just see if one could get back to a point of strength again” says Dolk. It was a year that culminated in ‘Ofidians Manifest’.

Though demos were written by Ole during the spring, shaped massively by him losing his father in the same period, the main song writing was done over the course of two months in the fall of 2018, with another month spent recording the album in Bergen, Oslo and Pärlby, Sweden. The band spent intense weeks together in their creative home of Hemsedal, moulding and shaping the songs, surrounded by mountains and forest that turned from summer green, to autumn yellow, to winter white as they worked extensively on what was to become this testament to the band themselves.

As part of the healing process of creating this collection of songs the decision was made to involve Agnete Kjølsrud on the track ‘Dominans’. Her contribution to the song lifted the atmosphere of the whole album, and the duet is one of perfect harmony between two very different yet familiar voices bonding to create an excellent song. Marianne Maria Moen’s contribution on album closer ‘Det Sorte’ similarly brings to light the realisation that all life is fragile and that our voices must be allowed to bellow through the world for as long as there is air left to bellow with.
The madness of Medusa was chosen as a visual clue to the record’s themes, represented by two different paintings to be explored on the physical releases. And again, the band decided to travel to Poland to record a music video, this time with director Dariusz Szermanowicz of Grupa 13. The video, hinting at the many underlying stories of the album, is a chaotic depiction of the road back to equilibrium, a place no one knows yet all walk towards. According to Ask Ty, the choice of song proclaiming the band’s return was made because “it tells you everything you need to know about Kampfar today, distilled down to four and a half minutes of intense breaks and turns, it is the beginning and the end and the new beginnings after that, and it is the sound of a band that is alive and well.”

‘Ofidians Manifest’ represents Kampfar anno 2019. 25 years on from their foundation, only willing to release new music if they felt it would surpass all they had done before, it is a condensation of the immense struggles of the last few years. Everything that has been hidden behind the music and the live performances is laid bare, though told in the only way the band can portray themselves, through songs. It is immensely honest yet wrapped in their own folklore, the snake tongues splitting every truth into two deeper truths, every word sung dominated by the weight of all those sung before.

KAMPFAR date back to 1994, as Dolk bid farewell to his former band Mock. His desire to continue expressing himself musically and to move ahead prompted him to seek new blood. He recruited Thomas to take on the guitar responsibilities and soon the duo began composing new material. ... more

Bandcamp Daily  your guide to the world of Bandcamp

Nightmares on Wax and Bremer McCoy stop by with their sublime new LPs.